In Naga villages, sustainable farming is being undermined by need to earn cash for medicine, schools


When you look down from the main road, the imposing Baptist church in Leshemi village, in Nagaland's Phek district, looks like a wedding cake.

But Leshemi's claim to fame is more than an impressive church. Leshemi is located on the hill opposite Khezakeno village, a place that the Nagas believe is the original village settled by them. From it, they believe, Nagas went off in different directions. The three main Naga tribes, Angami, Chakhesang and Sema, trace their origins to this settlement.

Leshemi is a small Chakhesang village, perched on a hillside with thick forests above and terraced rice fields below. What makes it unusual is that it is virtually a "village republic", a concept Mahatma Gandhi articulated. Its 800 or so inhabitants want little from the outside world, as the women tell you.

"Do you lack anything in your village?" I asked 65-year old Solhouii, part of a group of women who had just demonstrated how they spin yarn from stalks of stinging nettles found in the forest.

She thought for a while, then laughed and said: "No."

Though they do need a few things from outside, Solhouii said that they grow their own rice, millet, vegetables and fruit. They even make salt from brine found in a natural spring. There is plenty of water. They spin their own yarn from nettles and homegrown cotton. And they weave this into shawls and wraps, following the traditional patterns of their tribe.

Like neighbouring Khezakeno, people in Leshemi also believe that they live in one of the oldest villages in Nagaland. As proof they show you what they call their fetish stones (which, they believe, contain spirits and special powers), which were found by their elders. These stones are now being carbon dated to establish their real age.

A stone shrine of sorts has been built around one of the original fetish stones.
Two elderly men, who are hovering around the little structure, tell me that the stone "died" when the Indian army burnt Leshemi village in 1957.

That statement, said sotto voce, is a wrenching reminder of what ordinary people in Nagaland went through from late 1950s till the ceasefire in 1964, during what they call the Indo-Naga war. This was fought between the Nagas, who believed they were independent and not part of the Indian Union, and the Indian government and its army that saw them as insurgents to be forcibly brought into the Indian fold.

The village that stands today was rebuilt after that.

The women and men in Leshemi do not bring politics into the conversation. But you cannot escape the past, the sadness that hangs over such villages, and the memories that live on.
The old and the new

Just as the smiles, the jokes and the laughter hide deeper wounds, so does the talk of self-sufficiency.

For the reality in Leshemi, as in other villages in Nagaland, is that changes in the name of modernisation and development are undercutting the self-sufficient nature of their traditional societies.

A group of women farmers (and the majority of farmers are women) explained why today, what they grow is not enough to meet their needs.

A group of Chakhesang women in Chizami village, east of Leshemi village, spoke of the dilemma they face. We need cash, said one, to pay for school fees and medical expenses.
What they grow is enough to feed the family and sometimes there is a surplus that can be sold in the market. But the earnings from this cannot cover these other expenses necessitated by the introduction of education (Nagaland's literacy rate is now 80%) and modern medicine (in the past people relied on local cures).

As a result, the women look for work in the fields of others, where they get paid Rs 300 per day. The men find work as construction workers in the road repair projects that are perennially underway (despite which the roads are in a terrible state), and under the Mahatma Gandhi National Rural Employment Guarantee Act. Boards in all these villages announce improved village roads, or structures like community centres, that have been built courtesy MGNREGA.

(To read the rest of the article, click HERE)

Yes, it's time for a re-think – by people trying to deflect charges of sex crimes by their friends

An item in a Mumbai tabloid on Thursday said that journalist Tarun Tejpal, who is facing rape charges, had merely committed a 'grave error'.

Normally, the dozens of ill-informed and vacuous comments that find space in the “diary” sections of some newspapers are best ignored. Yet sometimes a response is needed.

I am referring to an absurd diary item in the Mumbai tabloid Mid-Day on June 9. As I said, it could be ignored as the newspaper is published only in one city, Mumbai, and has a limited circulation. Yet, in these days of Internet and social media, the reach of such publications is amplified.

So Malavika Sanghvi, in her column “Malavika’s Mumbai: The Daily Dish” (last item) that appears on page 8 of Mid-Day has taken up the case of Tarun Tejpal, former editor of Tehelka, who was charged with rape by a colleague, is currently facing trial in a court in Goa and is out on bail.

Under the headline, “Time for a RE-THINK?” Sanghvi refers to the serious rape charge against Tejpal as “a grave error”. And because this so-called error apparently gave “his detractors ammunition to demolish him” through an “excessive” and “relentless media campaign”, she suggests that it is time for “strong liberal voices” to speak out.

Posted by Kalpana Sharma at 4:58 PM No comments:

In politics and property ownership, there’s no space for Nagaland's women 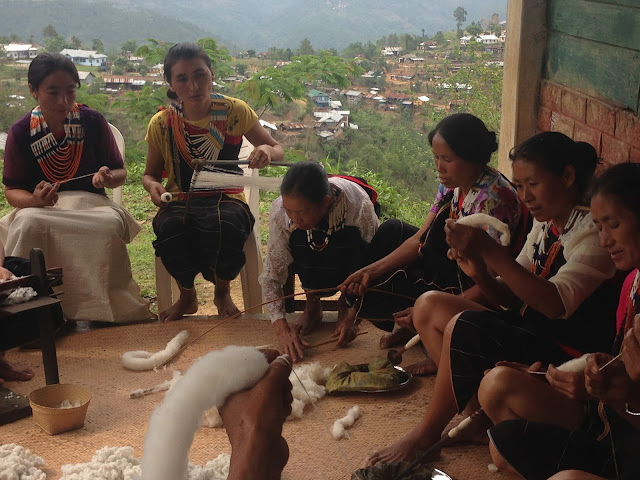 While the recent Assembly elections have been the subject of endless chatter in the media, in Nagaland, the question that hangs in the air is: when will we see women governing the state?

Nagaland attained statehood in 1963, but since then, it has not elected a single woman to its Assembly. It has also only ever sent one woman to Parliament – Rano M Shazia, who was elected to the Lok Sabha back in 1977.

This reality pervades through all levels of governance in the state.

Traditional village councils, formalised through the passage of the Nagaland Village Councils Act 1978, have hardly any female representation. And though laws have been enacted providing for 33% reservation of women in municipal and town councils, their implementation has been halted, as a result of which there is not a single woman in these bodies.

Read the rest of the article here.
Posted by Kalpana Sharma at 11:25 AM 1 comment: