40 years since the end of the Emergency

It is now 40 years since the end of the Emergency promulgated by Indira Gandhi on June 26, 1975.  It ended when in the general elections on March 21, 1977, she and the Congress Party were thrown out and the Janata Party won by an overwhelming majority.

It is a time many of us will never forget, especially the night of March 21 when the counting on ballots was taking place.  There were no electronic machines then. Ballots had to be counted physically.  And there were no 24-hour news channels to breathlessly follow the results.  So we could only stand outside counting centres and wait as someone came out and announced who was in the lead.

I remember standing with friends outside my old college, Elphinstone College in Kala Ghoda.  It was the counting centre for south Bombay.  We were all rooting for a man we had never heard of earlier, and most of us had never seen him.  His name was Ratansih Rajda of the Janata Party.  All I remember about him is that he always wore a white safari suit!

The excitment grew as the counting built up to a crescendo late into the evening and Rajda was declared elected!

By then, those of us in newspapers had gathered that there was a Janata wave of sorts through the ticker copy on PTI and UNI.  But the full extent of the victory was only known the next morning, when almost all the votes had been counted.

It is hard to describe the euphoria.  Most of us had not slept at all that night.  People were standing outside all the counting centres.  In south Bombay, people hung around Marine Drive and soon celebrations began.

For many of us, this election was our first where we actually felt involved in the political process.

I was reminded of all this today as Naresh Fernandes, editor of Scroll.in posted an article I wrote about Himmat and the Emergency.  Here's the link for those who did not read it earlier:

When a "womel" replaced a "manel" 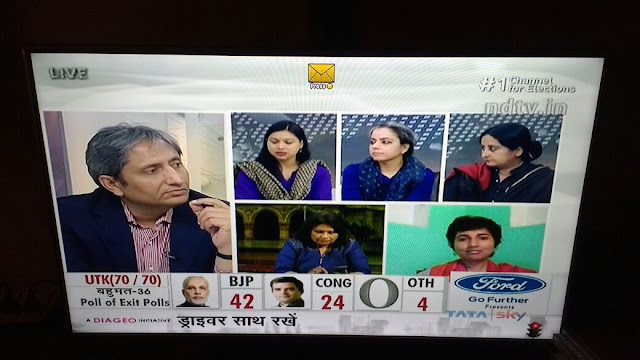 If all-male panels are called "manels", what should we call an all-woman panel?  Womels?

People, meaning even well-intentioned men, get irritated when women remind them that it is possible to attempt some kind of gender balance when organising panel discussions on a range of subjects.  But the norm remains virtually unchanged.  If the discussion is about women's issues, children, health, the elderly or other so-called societal issues, there is a preponderance of women on the panel.  But if the topic is politics, business, foreign affairs, defence and even law, women are rare or non-existent.

During the extended election process to five state assemblies that concluded earlier this month on March 11, the majority of commentators on television channels were men.  There were women, some of the regulars.  The anchors were sometimes women.  But the majority on any panel discussing the elections were never women.

No wonder the exception stood out.  And not surprisingly, the person to break the norm was Ravish Kumar of NDTV India, the indefatigable journalist who continues to dare the establishment, break the norms of the dominant forms we see in mainstream television journalism, and yet survives!

On March 9, when all the other television channels were going ballistic over the exit polls, Ravish Kumar hosted a "womel", an all woman panel of journalists who had covered the elections and were experienced political reporters.  The women journalists on the panel were Neha Dixit, independent journalist, Sunita Aron from Hindustan Times, Vandita Mishra from Indian Express, Supriya Sharma from Scroll.in and Poornima Joshi from BusinessLine.

Ravish Kumar deliberately decided to ignore the exit polls and instead drew out these journalists on the issues that faced the electorate in the different states that went to the polls.  The programme was informative, there was no shouting and screaming, no butting in or cutting off the participants.  The anchor gave each person adequate time to make their point.  In the end, the viewer came away with an enhanced understanding of the issues that underline the electoral process and that go beyond just the counting of the votes and the results.

In the last decade and more, scores of women journalists have been covering politics.  Unlike the 1970s and even to some extent the 1980s, no one is surprised today to see women interviewing politicians, covering election rallies, and writing incisive and analytical articles on politics in the print media.

Yet, on television, although women anchor programmes on politics, and are also reporters, they are still rarely seen as "experts" on the subject.  We have to question this.

Is it gender blindness on the part of mainstream television channels?  Or are experienced women journalists hesitant about pushing themselves forward even as their male counterparts boast about their contacts and experience, however limited?

Perhaps it is a combination of the two.  And even if one Ravish Kumar cannot topple dominant norms, his initiative has the potential to do so.

Here's a small news item that many people would have missed as they browsed their Sunday newspapers looking for more exciting fare.  But it tells you have steadily, and deliberately, the Sangh Parivar is erasing India's history.

The story appeared in the Times of India on March 5, 2017.  In sum it says that a fort, that has been historically established as having been built by the Mughal Emperor Akbar in 1570, and was always known as "Akbar ka Qila" has been renamed by the Bharatiya Janata Party (BJP) government in Rajasthan as "Ajmer ka Qila and Sangralaya".

How many more such creeping changes are taking place away from the eyes of the media and a public that fails to notice what's happening? 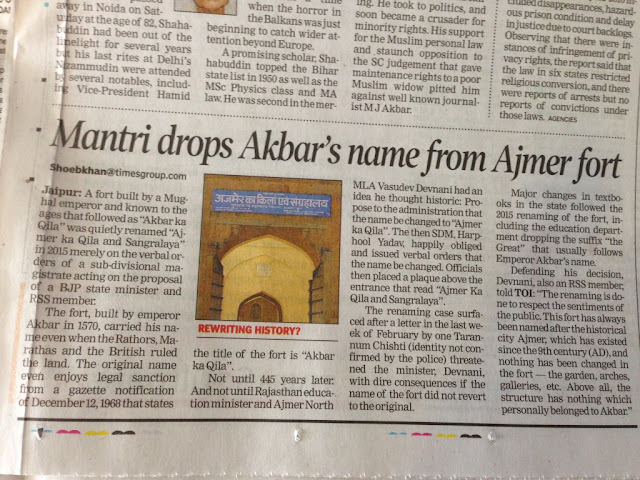