Election 2009 must be one of the most confusing elections in India's history as an independent nation. Nothing is predictable. No party, regardless of the postures it takes, is confident. And the lines between allies and enemies are so blurred as to be non-existent. We wait for May 16, when this month long process of voting ends and the votes are counted.

But till then, most depend on the media to make some sense of the process. And is the media doing that? Or is it adding to the confusion? The electronic media, in particular, seems content to put together talking heads who shout at each other. What we need to hear is the voice of the average voter. That voice is heard sometimes, but most of the time we are treated to the same old men and women who hog the television screen through the year.

This time, print has proved that it is more reliable. Many newspapers are bringing out some of the real concerns of the average voter. These articles give us an insight into what is really going on in India beyond the metros.

Here's a link to my column in The Hoot that discusses the media and elections:

Also my take on the elections, written for The New Statesman, and therefore necessarily simplified:

The son also rises but all bets are off

http://www.newstatesman.com/asia/2009/04/congress-party-india-bjp-prime
Posted by Kalpana Sharma at 11:59 AM No comments:

This election might be more peaceful than past elections although it is too early to tell after just the first round. But an important thread that runs through it is the role of memory of past wrongs and the violent history of some political parties that refuses to be erased.

The withdrawal of Jagdish Tytler and Sajjan Kumar by the Congress Party as candidates for the Lok Sabha is only one illustration of how people do not forget or forgive that easily, especially when there is no closure, no reassurance that a genuine attempt has been made to bring justice. The Sikhs have not forgotten 1984 even if the rest of the country has. This is now clear.
Justice denied

The Muslims in Gujarat have also not forgotten 2002 because the perpetrators of those horrific acts of violence are still at large. Some of them have also won elections. There is no remorse, no genuine attempt to ensure justice. This might not impact the election results in that State this time, or perhaps even the next time. But in the long run, the Bharatiya Janata Party will be held accountable just as the Congress Party has been forced to face the cost of attempting to erase history. People are not likely to forget, or forgive, the BJP’s flaunting of Gujarat Chief Minister Narendra Modi as its chief campaigner in this election even if its manifesto speaks of development and security. The images of Gujarat 2002 live on in the memories of more than just the people who were directly affected by the violence.

Orissa 2008 is another example of political violence that will linger on and come to haunt its perpetrators. The victims of the terrible violence in Kandhamal just six months ago, Orissa’s Christians, are still living in camps. Most of them have lost all their identity papers, including their voters’ identity cards. According to newspaper reports, not only are they afraid to leave the camps but they are also afraid of voting because they fear that their choice will be known to those who tortured them, people who hold the reins of power. Their only choice is not to vote at all. One of the residents of a camp told a journalist, “Unless the booths are set up right here, it is not possible to vote. We will not step out on polling day as we expect further violence after the polls as the polarisation has been complete”. (Hindustan Times, April 13, 2008)

The BJP’s candidate from the site of the worst violence, G. Udayagiri, is Manoj Pradhan who was directly implicated in last year’s violent attacks on Christians. And its Lok Sabha candidate is a former policeman, Ashok Sahu who is now the State President of the Hindu Jagaran Samukhya, a group that makes no apologies for the attacks on helpless Christian communities. He was recently quoted as saying, “What happened in Kandhamal is no reason to be ashamed about, at least not for me. Today Kandhamal symbolises Hindu culture.”

The BJP’s support of people like Manoj Pradhan and Ashok Sahu, and not to forget Varun Gandhi, reminds us yet again that its true ideology remains unrepentantly majoritarian, communal and divisive. Elections are the best time to test what percentage of the Indian population really believes what Ashok Sahu has stated, that the massacre of innocents in Kandhamal symbolises Hindu culture.
A timely reminder of the lingering memory of violence in the lives of people who have lived through it is the thought-provoking film by Nandita Das, “Firaaq”. The film has been released at an important time, for, it illustrates what happens to ordinary people, their relationships and their lives when communal violence seeps into every crack and crevice of a society. No one is untouched. Victims of violence discover that all relationships, including the closest ones, become vitiated by suspicion and fear. Those on the other side of the divide either live with the guilt of not having done anything, or with the fear that their role in the violence will be discovered. And even those who believe in the strong syncretic traditions of Indian music and art are forced to face the ugly reality that the delicate threads that have held different communities together for centuries cannot survive such vicious communal violence.

What I personally found particularly interesting was how the director brings out the double-edged sword that many women face. Thus, the wife of a Hindu bigot, who is tortured by her inability to help a Muslim woman in distress, faces violence in her own home as does the wife of a Muslim who has lost everything because his community was targeted by Hindu mobs. Neither woman knows the other. They are on opposite sides of the communal divide. Yet their experience of violence, within and outside the home, places them virtually on the same side.

A film like “Firaaq” reminds us during an election that many complex factors dictate people’s choices and actions. As Indians get used to the idea of elections where their vote can actually lead to a change, it is becoming increasingly difficult to predict outcomes. What makes election 2009 especially interesting is the fact that people are now beginning to understand the value of their vote. They also know that one election is not the end of their ability to make a choice.

A young scholar doing her Ph.D. research in Madhya Pradesh narrated to me her experience of talking to a very poor woman in the town where she is working. This woman compared her vote to a single grain in a fistful of grain. Even one grain, she pointed out, could shift the scales.
Posted by Kalpana Sharma at 12:47 PM 2 comments: 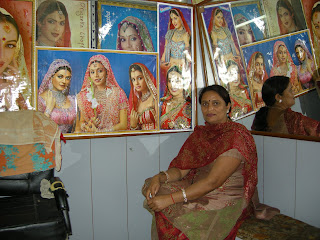 Rajeshwari Nora in her beauty parlour in Narnaul, Haryana

They cannot compete with Mayawati, or Jayalalitha or Sonia Gandhi. But the new breed of women politicians springing up in India’s small towns will become a political force to reckon with in the years to come.

Take Rajeshwari Nora, the owner of a beauty parlour by that name in the town of Narnaul in Haryana’s Mahendragarh district. Her 6 ft by 10 ft beauty parlour has mirrors on two sides and large posters of a host of popular Hindi film stars ranging from Rani Mukherjee to Katrina Kaif on the back wall. Two swivel chairs and a bench for those waiting their turn completes the furniture. All the film stars are dressed in bridal finery. Rajeshwari tells me she specialises in bridal make up. Beauty parlours are a flourishing business in this small town of under one lakh people, she says.

At home in politics


But Rajeshwari is not just in the beauty business. She is also into politics as a nominated member of the local municipal council. And she takes her task seriously, worrying about the water supply and garbage clearance. She already speaks like a veteran politician. “My family was in the BJP. I was also in the BJP. Right now I’m in the Congress. But I can change,” she tells me without the slightest hint of embarrassment.

In Mirzapur in U.P., a town on the banks of the Ganga that also hosts the carpet industry, Mamta Yadav is enthusiasm personified. This 28-year-old MA in history has been elected to the Mirzapur municipal council. She got the largest number of votes and says she won because “people thought we should vote for an educated person.” Mamta also heads the standing committee on education and she loves every minute of the importance and attention she is getting. “Rajneeti bahut achchi cheez hai (politics is a very good thing)”, she tells me as we sit in her home in Mirzapur town.

Mamta lives in a middle-income colony with paved paths and unexpectedly clean drains. Her husband, a cable operator in five wards, supports his wife’s efforts. Unlike other husbands of elected women representatives, he defers to her and lets her do all the talking. “I’m a fan of politics,” says Mamta, a mother of two children, a boy aged nine and a girl aged five. Earlier, she had considered becoming a teacher. But now she has been bitten by the rajneeti (politics) bug and intends to continue.

Mamta says she draws inspiration from Mayawati, Pratibha Patil and Sonia Gandhi. “Whatever you say, women are proud that a woman and a Dalit has reached such a high position,” she says of Mayawati. An interesting comment coming from a woman who is not a Dalit and who is close to the Congress Party.

In Rajnandgaon in Chhatisgarh, a Dalit doctor is a member of the municipal council. Dr. Rekha Meshram is a Mahar. She runs her clinic and her office as a councillor from her home, located in a colony of Mahars. Her education helps her, she says, to understand her duties and her rights as a councillor. She can read the budget and discuss it unlike other councillors, many of whom are barely literate.

But Rekha has a different spin on educated women entering politics. “I understand why educated people don’t want to enter. We need to be patient, to be articulate. Being educated is the biggest handicap in politics. You can’t get ahead on your own talent. Till you have a godfather, you can’t go all out. Women get caught, entangled in this web. Party politics is very difficult for women members.” Rekha is a member of the Bharatiya Janata Party. Although she believes that women have a difficult time, she too is convinced she will continue to be in politics.

(To read the rest of the article, click on the link below.Many more Mayawatis)
Posted by Kalpana Sharma at 2:55 PM No comments: