This is a longer version of the op-ed article in The Hindu that appeared on July 17, 2019:  https://www.thehindu.com/opinion/op-ed/the-many-hurdles-in-proving-citizenship/article28493185.ece?homepage=true 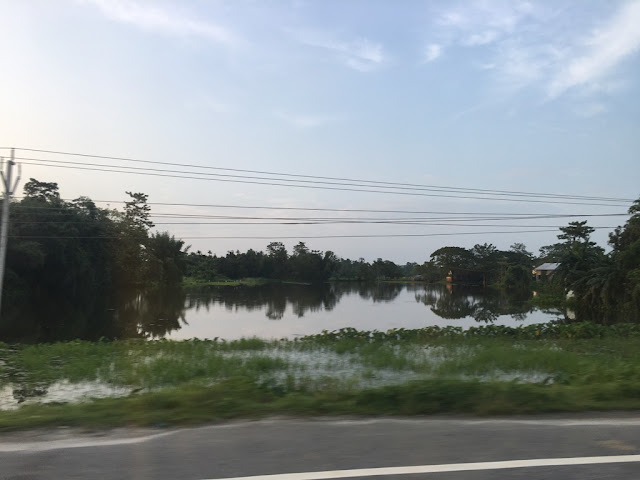 Floods are an annual event in Assam. Thousands of families lose their lands, their cattle and their homes, as relentless rains submerge vast tracts.

This year, along with the floods, another humanitarian crisis awaits the state. The date is already set. It is July 31.

On that day, the final list of the National Register of Citizens (NRC) will be released, the culmination of a fraught process conducted since 2015 at the urging of the Supreme Court, and monitored by it.

While reports of the many anomalies that dog the process of determining citizenship, including the constantly changing list of documents that are, or are not, accepted, the sheer enormity of the human crisis facing the state has yet to register in the rest of India.

Numbers alone do not indicate this.  What is known today is that out of a population of 31.1 million (2011 census), projected to be around 33 million today, 32.9 million have applied to the NRC to be listed as a "genuine" Indian citizen.  Of these roughly 29 million have been accepted.

It is the future of the over four million excluded from the NRC so far, a number that might reduce when the final list is published on July 31, that provides the foundation for the impending human crisis awaiting Assam.

Even if half of this number is excluded, in that these people cannot establish their credentials as Indian citizens, we are looking at the future for two million stateless people.

What will happen to me and my family after July 31? That is the question that haunts thousands of men and women. The anxiety in their strained faces is haunting. Hundreds of individuals, clutching frayed plastic bags containing documents, will wait hours in inclement weather to meet anyone willing to listen, and answer this one question. 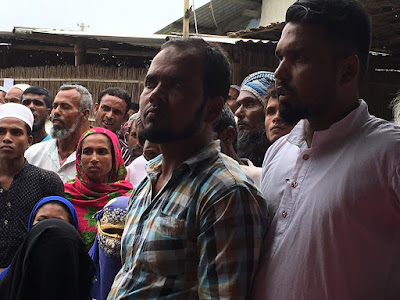 After travelling to three districts in Assam at the end of June, the full dimension of this humanitarian crisis hits you.

The majority of the people left out of the NRC so far are abjectly poor; many are unlettered.  They cannot understand the legal complications of the process; nor do they have the money to hire legal help.  As a result, literally thousands stand in danger of being declared "foreigners" even though they could be "genuine" Indian citizens.

The people affected by this process of verification of citizenship fall into three different categories. One is those who were marked "D", or doubtful voter when the electoral rolls were revised in 1997.  Their names are excluded from the NRC unless they can establish their credentials before a Foreigner's Tribunal.

There are currently fewer than one hundred such tribunals in Assam. The opacity that surrounds the way decisions are made in these quasi-judicial courtrooms is a separate story.

The second category is people picked up by police on suspicion of being illegal immigrants.  The border police, represented in every police station, finger prints them, and then informs them in writing that they must appear before a Foreigner's Tribunal to prove they are Indian. Most such cases are of poor, daily wage workers who are unable to assemble the relevant documents.

The third is of those who have registered with the NRC, but have been excluded because there was a discrepancy in the documents they submitted. One list of exclusions with four million names was published last year; another on June 26 this year with 102,462 names. Many of those on the excluded lists have filed additional documents in the NRC centres. Their fate will be known on July 31.

In addition, there are people who have already been declared "foreigners" by the tribunals.  In February 2019, the government informed the Supreme Court that of the 938 people in six detention centres, 823 had been declared foreigners. How long will they be held? Can they be deported? To which country? These questions remain unanswered.

In this haze of numbers and judicial processes, the real and tragic stories of individuals often go unheard and unheeded. 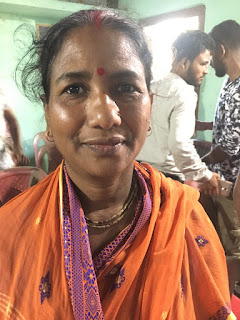 Take Anjali Das, a 50-year old woman who we meet in Bijni, Chirang district.  She is one of four women sitting in a small room full of men, waiting patiently for their turn to present their cases to a group of lawyers.  The meeting has been organised by a local group, Bharatiya Nagorik Adhikar Surakshya Mancha.

Dressed in a rust coloured saree, Anjali cannot hide her anxiety behind a weak smile. Her maternal home is in Jalpaiguri, West Bengal, where her father and brother still live.  Anjali came to Assam in 1982 when she married.

She has no birth certificate, like so many people in India. She does have a school certificate that states she was a student up to class five and gives her date of birth as June 1, 1969.  She also has a certificate from the panchayat, and her father's Aadhar card as proof that she is Indian. But this will not suffice.  Anjali's name has been excluded from the NRC, the only one in her marital home. And she cannot understand why this happened.

Anjali Das is only one of thousands of married women who have been left out of the NRC for similar reasons. Although disaggregated data is not yet available, it is estimated that more than half of those excluded from the NRC are women like her. 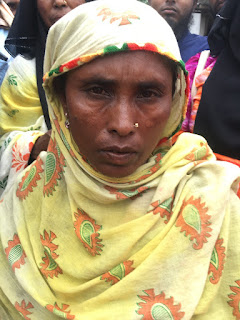 Then there are women who are struggling to understand why some members of their families have been excluded. In Hanchara village in Morigaon district, Jamina Khatun arrives with the ubiquitous plastic bag full of documents. She pulls out a photocopy of the June 26 list of names excluded from the NRC. The list has the names of her husband, her two sons, and her 11- year-old granddaughter.

The latter's name is likely there because Jamina's son, Nur Jamal Ali, was referred to the Foreigner's Tribunal based on a complaint by the man from whom he rented a room in Jorhat.  He was working there as a construction worker.  The complaint led to Nur Jamal being finger printed by the border police, sent a notice to appear before a Foreigner's tribunal, and then declared a foreigner. As a result, his only daughter is also excluded from the NRC.

Multiply Anjali and Jamina's stories a thousand times over and you get a picture of the scale of the crisis in the lives of tens of thousands of poor people in Assam. Men and women of all ages, travelling long distances with plastic bags bulging with any and all documents they can gather, swamp anyone who extends help, by way of legal counseling for instance.

After July 31, the focus will shift to the Foreigner's Tribunals. The state government plans to set up 200 by the end of this month and eventually one thousand, as all those excluded from the NRC will have to present themselves before these tribunals.

Only the litigants and their lawyers know what happens within the four walls of these tribunals as neither the public nor the media are permitted.

To try and visualize what happens in these quasi courtrooms, this writer tried to get a peek into one in Guwahati. 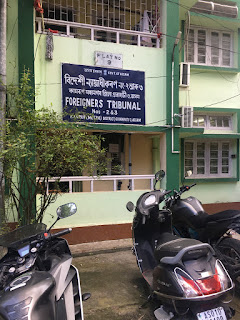 Foreigner's Tribunal Court Room 3, Kamrup Metro district, Guwahati, is located in a residential colony on the ground floor of one of the buildings. Above are flats that are occupied, evident from the washing hanging out.

The room is small. It is arranged like a courtroom.  A white railing separates the podium on which the tribunal member sits from the litigants. The railing becomes a small witness stand at one end.

The tribunal member has the help of an assistant who sits on the side. His job, one such assistant tells me, is to check documents. On the high desk there is also a computer screen and a printer.

According to the assistant, who does not give his name, cases are heard on simultaneous days, stretching out to five days.

An elderly man, a lawyer, who walks in, has a different story.  He looks at the top of his brown folder. The case he has come for began in March. It is now July and it is still being heard.

The assistant also confirms that I can only sit in for the hearings if I get permission from the secretariat.  So far, no journalist has been granted such permission.  The only way to gain access is by subterfuge.

This then is the other problem. People travel long distances to appear before the tribunals. Their cases stretch out over months. This means spending money for travel and stay, apart from lawyers’ fees.  For those living in poverty, this is unaffordable. 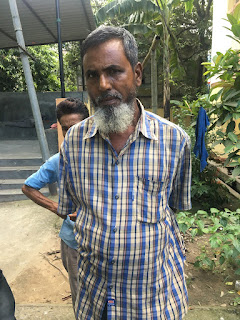 Men like Nurzamal from Pathari Namargaon, South Salamara Mankachar district. He stands outside the tribunal building waiting for a lawyer.  Like Jamina Khatun's son, the border police in Guwahati picked up Nurzamal where he was employed as a construction worker. He was finger printed and then sent a notice to appear before the Foreigner's Tribunal in Guwahati.

Nurzamal's home is around 270 km away from Guwahati. He has already made five trips from his home and does no know how many more. If he gives up, or cannot afford to make the journey, his case will be decided "ex parte".

Literally thousands of cases are being judged "ex parte". In a statement in the Lok Sabha on July 2, the Minister of State for Home Affairs, G. Kishan Reddy acknowledged that from 1985 to February 2019, 63,959 people had been declared foreigners in ex parte rulings.

An illustration of the arbitrariness surrounding this process comes from a case in the Supreme Court for which notices were served on July 3 to the central government and Assam government. In this case, Hazizul Hoque was sent to a detention camp on March 24, 2017 after being declared a foreigner ex parte by a tribunal. The only reason this happened is because Hoque, who suffers lower limb paralysis, could not attend the hearings.  Even his appeal to the Gauhati High Court was dismissed.

There are already many more stories like Hoque's.  Unfortunately, the majority cannot go even to the High Court to appeal leave alone the Supreme Court.

The citizenship issue in Assam is layered and complex.  It is not easy for people outside the state to understand all the multiple threads.

What is clear though is that the brunt of the systemic problems of establishing citizenship in this manner, and in such haste, is being borne disproportionately by the poorest.
Posted by Kalpana Sharma at 12:24 PM 1 comment: